Decades ago “Autopilot” parenting was safe, because there was a continuity in society, unlike today. Back in the 40’s through about the 70’s the model for raising children was infused with clarity. The goals during that era were supported by society at every level. Communities were in sync with the idea of  raising healthy and productive children, so they would enter adulthood well equipped to face adult challenges.

Family was the centerpiece of children’s lives, well-defined and more stable than they appear to be today. Most families had stay-at-home moms, who cooked healthy meals from “scratch”, managed theirs homes with precision, and were cheerleaders for their husbands and children. Parents  were aware of what was being taught in their sc

hools and churches, and approved of the message their kids were learning. The styles of the day in clothing were modest. There was neither the desire or need to “Let it all hang out”. Foul language was frowned on, and was considered a sign of an inadequate vocabulary for expressing ones self. Electronic devices were nonexistent, and social media did not exist. Kids played their hearts out from dawn to dusk during summers away from school and on week-ends during the school year, out side in the sunlight. Neighborhoods were full of comrades and friends. I don’t remember kids going to foster homes. Communities provided orphanages that housed kids in dorm styled rooms.  These institutions had their own on site schools, and cooking and eating facilities. The goal was to try to replicate family life for these children. Multiple children from a family were not separated, but kept together.

Schools taught reading, writing, arithmetic, social studies, history, and science, and left sex education and religious concepts to parents, and to the churches the families attended.  The churches in turn taught their interpretation of their believes and avoided politics. The separation of church and state was understood and honored. Respect was taught, and kids did not rebel. Teachers did not have to police their classes. Lessons could be absorbed in a safe environment, unlike todays classrooms. Bullies were not tolerated, and the American flag was saluted daily.

Even the business communities promoted a healthy environment.  Most  retail stores opened at eight or nine in the morning and closed by five or six in the evening, Monday through Saturday. The exception was on Thursdays, when stores stayed opened until nine. City streets were practically empty on Sundays, since all retail establishments were closed.  The exception was a few restaurants who were filled with families after church.  The drug stores and “gas stations” rotated so some employees could have an occasional Sunday off.  Eventually Seven eleven convenience stores opened.  As their name indicates, they opened at seven and closed at eleven, seven days a week. The retail community helped strengthen families. Working parents went home at the end of the work day, sat with their families at the dinner table and ate a home cooked meal, helped with their kids homework, if necessary, and did whatever the family chose to do with the remainder of the evening. 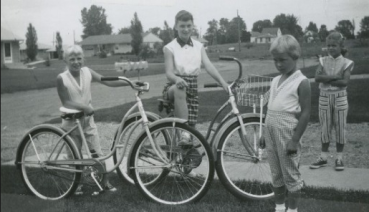 Laws were clearly defined and respected. The only vices back then, were alcohol, tobacco and gambling, as I recall. Communities welcomed the support of the men in blue. Children were taught to respect police, and that  they were their friends.  If you asked a little boy what he wanted to be when he grew up during the 40’s and 50’s “Policeman” was usually on his list.

Communities, families, schools, churches, and society on a whole taught the same version of  self-control, values, goals, morals, respect, the concept of cause and effect, and love of country. Being Politically correct was not needed, because common sense, and respect was taught and practiced. I wish society today would draw on the lessons of yesterday, and get their act together to help save our leaders of tomorrow.

I realize we can’t turn back the clock. Electronic devices and social media will probably be around until something new comes along. Many other things are different as well. But wouldn’t it be nice if parents could revisit the lessons from history and pull out ideas that worked, and retool their approach where parenting is concerned. Our children and youth desperately need a strong and well thought out plan for becoming successful citizens, and the first teachers they have in life are their parents. Please, lets stop cranking out Snowflakes.