I belong to a small group of ladies who all suffer from severe depression, are bipolar, or have a family member or friend with serious issues. We meet regularly and discuss whatever we need to talk about. Our recent meeting touched on Robin Williams, since the anniversary of his death is Aug. 11th. Some shared past “hiccups” they had encountered as well. Here is a recap of that mentoring session.

Many in the group thought Robin was bipolar even thought he was never formally diagnosed. He always seemed “Turned on” most of the time when he was performing, being interviewed, or out in the public eye, and maybe even with his family. I believe that was the only way he felt safe and accepted. I know I have become an academy award level actress during my “Down Moments”, when I am in public, and am fighting depression, or I hide in my “Shame Closet”, and stay home. When I am “UP” I resemble a life of the party, full of energy, happy-go-lucky gal. There are some times when I am centered and usually present myself as cool, calm and collected. Most in the group nodded in agreement, with a sense of understanding. There is no magic test to prove or disprove one has Bipolar Disorder. Usually the diagnosis is based on observation and information the patient shares with a professional.

Others in the group talked about Williams, and his apparent struggles. It seemed to be common knowledge that Robin tried to get relief from drugs and alcohol throughout his life, with probably little success. He had acceptable amounts of prescription drugs in his system at the time of his death. He was free of alcohol as well. It was reported that he was suffering with severe depression prior to his suicide. He had been misdiagnosed with Parkinson’s, instead of the Lewy Body Dementia which was discovered after his passing. His wife revealed symptoms that accompany Lewy’s and his early symptoms that began around Oct. 2013. The symptoms included sudden and prolonged spikes of fear and anxiety, constipation, urinary difficulty, heartburn,  insomnia, poor sense of smell, stress, and a slight tremor in his left hand. Eventually he suffered paranoia, delusions, problems with memory and high cortisol levels, indicating stress. His wife Susan said ” He was losing his mind”.

I shared that I believed, when Robin left this earth, taking his own life, people with mental problems were struck with a feeling of hopelessness. After all, this gifted, loved and talented man, who brought so much laughter and joy to the world,  who had the financial resources to get counseling, and top of the line medical treatment, could not overcome his depression and pain, to the point where he would rather die than suffer any more. I shared the statement related to suicide, ” No one wants to die, they just want to stop hurting and stop the symptoms they are bombarded with”. 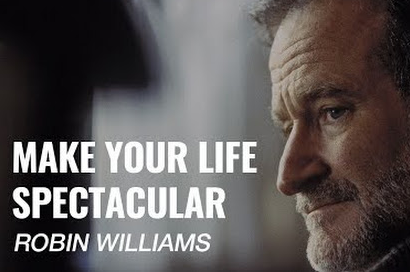 Another member recalled reading about what Robin said in a 2010 interview. He said something to the effect that remembering using cocaine, being paranoid & impotent, was no fun. He added ” There is no bit of  me thinking ooh, let’s go back to that. Useless conversations until midnight, waking up at dawn, feeling like a vampire on a day pass, is not what you are after”.

Our subject turned to the medical profession and drug makers. Unfortunately we agreed that we did not trust the medical profession to solve many mental health issues, because it is a money cow. The usual message heard about mental illness is, WE NEED MORE MONEY, for research, or what ever they think will open the flood gates to dollar bills. The focus seems to center around treatment instead of cause. I tossed out the idea that Gene Therapy might be a solution to correct the flaw in the chemistry producing part of the brain, but the greedy pharmaceutical company’s would figure out how to block that if a study ever got going in that area. I added that I thought the medical and pharmaceutical industry was about as useful and productive in solving mental issues, as Congress, and that is pretty bad.

One member had a personal experience she wanted to share, because it turned out well. She has a mentor outside of the group who helped her regain her footing after a huge “down”. Here is what she shared about how she felt as she was beginning to coming back from the bottom. She had already had about an hour with her mentor and thought their “Session” was over.  She continued,”I went for a short walk hoping my mind would become more clear. When I am down I feel empty. When I am up, I feel full. My goal alway is to stop in the middle on the way up or down. The flaw that I have is what makes me feel ashamed. The fact that my chemistry is flawed makes me feel my whole body is flawed as well, and that creates a feeling of worthlessness that is on my mind, and in my consciousness 24/7. It is painful knowing I am flawed and probably have no control over it. That is where the closet comes in and sleeping or hiding is easier than being aware or living through the moments of pain. Waiting it out, so to speak, is scary. There is no clock I can watch, and know that the pain will again, and temporarily, be gone. There is the  knowledge that it will rear its ugly head again in the future, guaranteed. I was able, with the help of my mentor, to stop my downward spiraling. On the way up I faced the task of climbing one step at a time and focused on stopping midway and taking a long break.” She smiled and recounted that her mentor called back and asked her if she was up to helping solve a problem. This gesture made her feel worthwhile and needed and she jumped at the chance to help. Her mentor was wise enough to remind her that she did have value and that her help was needed.

In conclusion, the group agreed that they thought a lot of people with serious mental issues did understand Robin and his choice, and were, in a way, happy for him, because he was no longer in pain. I think they also left wondering if they had the courage to endure their pain, and keep living, and keep up their fight, to beat their unbeatable conditions. All present at the meeting were happy we had found a way to mentor each other. We had created a safe place, without judgements, and without the need for a closet to hide in. We all hugged and the meeting was adjourned.