On the day Kennedy was shot and killed in Dallas, TX I was living in Spokane, WA. I had been living there for less than a year, having moved there from Dallas where I was born. My husband was an intern . We had two boys. The kids were watching a children’s program when there was a news alert. I could hardly believe what I heard. “President Kennedy has been shot in Dallas and is being rushed to Parkland hospital”. We were very familiar with that county hospital, since the medical school my husband went to sat next door. He recognised the names of some of the doctors who worked on Kennedy.

I had a pre-planned appointment that day, so I headed down town where few cars were on the road and a couple of people were walking, holding transistor radios close to their ears. When I returned home I stayed glued to the TV for days. I watched the funeral, the reported capture of Lee Harvey Oswald, the shooting of Oswald by Jack Ruby and all other coverage. The shooting of Oswald was actually caught on live TV as I recall. America was brought  to its knees for a long time after these events.

I remembered the day Kennedy won the election. I was with several medical students and their families. We were shocked that he had won. We collectively agreed that we hoped nothing bad happened to Kennedy, because we all considered Johnson a crook because of his history at winning questionable elections over the years.

The minute I heard Kennedy was dead I felt Johnson had his hands in the assassination. Recently some things Mrs. Kennedy wrote years ago revealed that she thought Johnson was to blame as well. A  fellow blogger of mine wrote about his memories of this terrible moment in our history.

I welcome any memories from others  who remember this day, in the  comment section.

That awful day in November 1963, when President John Kennedy was assassinated, was forever burned in my memory. It was such a tragic day that the world seemed to stop turning. I was 16, in my junior year in high school, when I heard the awful news projected over the school PA system during lunch. I do not remember many details…only that there seemed to be an awesome silence that totally engulfed everyone of all ages as we listened to the live news feed being broadcast. The memory remains as the most outstanding public event of my childhood. It was a day that the world truly stopped turning with the loss of a great American president. 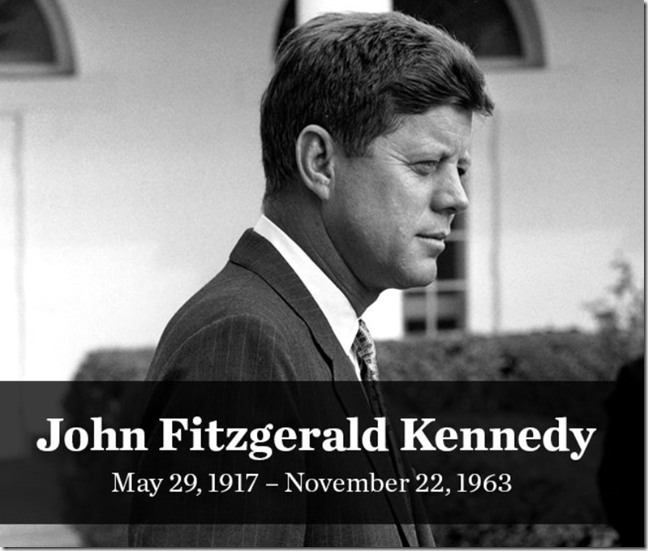