My Thoughts On Trump & Why I Still Support Him

There have been many changes in Trump’s world. Some make sense to me and some do not. He has been fighting an uphill battle from the beginning. I think he thought his party would stand behind him after he won, but they have not. Here is a partial overview of what has happened and my reasons why I am still in Trump’s corner.

In July Rich Higgins, a NSC staffer was fired by H. R. McMaster for calling out radical Islam. He was in the strategic planning office. He argued that Trump was being subserved by an array of foreign and domestic  enemies in a memo that apparently McMaster disagreed with. I suggest going to YouTube and type in Rich Higgins. The video I watched was a 30 minute interview by Ginni Thomas of the Daily Caller. The interview was done in 2016 but is very relevent today.

Sean Spicer, Trump’s Press Secretary, and Michael C. Short, a senior press secretary are gone. Sean has been a recent guest on an award show and has been interviewed on a station that regularly bashes Trump.

Reince Priebus, past head of the Republican National Committee and Trump’s Chief of Staff for over six months is gone. So is Katie Walsh, deputy Chief of Staff. I never trusted Trump’s choice when he picked Pribus. During the time leading up to the election he seemed lukewarm and not really on board for Trump. He seemed to me to just be going through the motions because Trump was the nominee. I think he and many in his camp could very well have been the source of many leaks coming out of the White House. I am pleased that he and Walsh are gone.

Others who have left are, Walter Shaub, the Director of Government Ethics and Angella Reid, Chief Usher. Both seem like smart moves. Reid had full range of the Whitehouse without being noticed.

James Comey, FBI Director is gone and should have been fired on January 21st in my opinion. There was going to a backlash no matter when he was fired. Many of the voters were surprised that Trump waited so long.

Sally Yates, acting AG, got the ax when she refused to back Trump on his legal move against a travel ban.

Two that saddened me were Steve Bannon and Sebastian Gorka. But after stepping back and hearing what Bannon has said I think he can be more helpful where he is and can speak freely and support Trump’s “Make America Great Again”agenda. The same goes for Gorka. These are two very public patriots.

Recently President Trump accepted the resignation of Tom Price, the embattled health and human services secretary, in the midst of a scandal over his use of private planes. 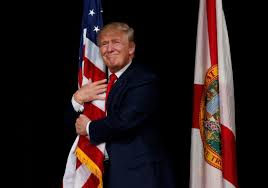 So here are my thoughts behind why I am standing firmly behind my president, Donald J. Trump. I think Trump has made some mis-steps. But when he recognizes his mistake, or see people using poor judgement he steps in and corrects the problem.

I am not ready to throw the baby out with the bath water. The left is hoping we will stop supporting him. He is my President for this 4 year term. I am not going to spend my time tearing him down. He has done much good and that seems to be overlooked by the press and many others who hate him. No matter what he does he is going to have an abundance of dart throwers using him as a bullseye. I will NEVER join that group.

We have never had a politician, in my memory, who loves America more. He needs more in Congress who are in his corner. The turn coats need to be dealt with. The Republican party is fractured and needs to come together. Trump has uncovered the fact that the swamp is full of elected officials in both parties. Maybe working to get rid of McConnell, Ryan, Collins, Flake, and especially Cruz and Rubio, who are eying the 2020 presidential race and others, would be a better place to expend energy. Trump is still fighting The DEEP STATE corrupt hold overs from Obama in all agency’s including the FBI, CIA, NSA, some in the Military, IRS and leakers, to name a few.

As long as Trump is willing to take the hits from those who hate him and America, and is willing to drain the swamp and try to help this great country regain its greatness no one will hear me bash my president during his four-year term. He might just surprise the left and the swamp and complete eight years.