I think what has surfaced from the departure of both Roger Ailes and Bill O’Reilly is far more sinister than many people are willing to admit.  The story is full of a cast of characters and concerns including, O’Reilly, Ailes, the Murdoch family, Fox News, Obama, Hillary, Media Matters, David Brock, an ambulance chasing attorney, revenge, the desire to stomp out conservationism and free speech at any cost. The use of sexual abuse and harassment allegations is a tool being used for destruction.  O’Reilly has recently come under fire for alleged harassment charges which he adamantly denies. 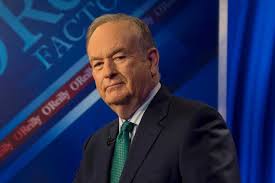 His official statement is as follows: “It is tremendously disheartening that we (Fox) part ways due to completely unfounded claims. But that is the unfortunate reality many of us in the public eye must live with”.

O’Reilly’s leaving could very well be the final straw that causes the demise of Fox News, the only conservative leaning 24 hour news network we have today that is main stream.  He has been the jewel in the crown, so to speak, bringing in billions for Fox over the twenty years he has worked there.  As of Feb.  2017 Fox had led the rating for 182 consecutive months in total viewership largely due to his O’Reilly Factor Show. Fox News beat CNN and MSNBC COMBINED in Feb. ratings.

There are some interesting reasons why O’Reilly has become a target, in my opinion. Before the 2016 presidential election he tried to be “Fair and Balanced”, offering time to both Clinton and Trump.  Clinton declined, Trump showed up regularly. Since the election he has been more Pro-Trump. Whether he was for him or not he has been on the side of …..he is my president now and I support him. He has come down hard on the fake and disrespectful press because he felt they were clearly targeting Trump to the point where they want him gone at any cost.

He also had a segment on one of his shows where he slammed the press for not covering a story about a developmentally delayed girl who was raped and abused by 3 immigrant boys in Twin Falls Idaho. He questioned the wisdom of the cover up, gaining some enemies.  The story is still on going in the court system.

A second story, on his show, that must have ruffled feathers was a story on ICE activities.  He went on the record to say that ICE’ raids targeted illegal immigrants who were criminals and were not reported by the radical left. He said the media was  misleading their readers and were being BLATANTLY DISHONEST. He noted that The President was upholding laws we have in this country.

Let us go to another piece of the puzzle in this saga, The Murdoch family. Rupert Murdoch replaced Roger Ailes, who had guided Fox New to its success, as Chairman and CEO, amid sexual harassment allegations.  Murdoch and his sons are main characters in 21st Century Fox, the parent company to Fox News, Murdoch’s youngest son, Robert, is Chief Executive at that parent company as well. Rupert has since turned over much of the decision-making over to his sons. The two sons have wives who do not share the conservative leaning of Fox News and their  message.The story  goes that Rupert and son Lachlan wanted O’Reilly to remain, at least until the recent allegations were resolved. O’Reilly’s contract had just been extened only weeks before.  James’ wife works for Clinton Climate Initiative, is on the board of Environmental Defense, and is openly an  outspoken hater of Trump on Twitter. James wanted Fox to become CNN2.  Both wives were reportedly instrumental in convincing all involved to oust O’Reilly.

I was reminded of a side story about James and his father.  Both were involved in a scandal of sorts in the U. K. James was forced to resign as chairman of BSkyB in the wake of a phone hacking story. BSkyB was formed in 1990 by Rupert. It is a British broadcasting concern. In  July of 2011 James announced the closure of the British tabloid newspaper News of the World in wake of the scandal. And in a 2012, a U. K. Parlimentary report  stated that both father and son should take responsibility for wrong doing that occurred pertaining to their World New International, which I am assuming was the parent company of News of the World.

Now for the dirt involving the alleged  harassment complaint about Bill. The accuser’s name is Perquita Burgess, an African-American lady, who lives in North Carolina, and worked as a Temp for Fox in 2008, and did not make any complaints until recently. Burgess’ complaints were as follows: O’Reilly leered at her breasts, grunted at her, called her hot chocolate at one point, and said “Looking good there girl”.

The  attorney on this case  is  well know,  named Lisa Bloom, who many consider an ambulance chaser. She is daughter to Gloria Allred, another with the same reputation.  Allred represented a Trump accuser who was allegedly being paid a huge sum of money by Allred, and those funds were being supplied,allegedly, by Clinton or someone involved with her. Talk about the apple not falling far from the tree.  Anyway Bloom heard O’Reilly claim that no one had ever complained about him to the Human Resources Department or called in to the “anonymous hot line”. Bloom had an “aha” moment. She knew of a person named Wendy Walsh, who had mentioned something about Bill that made her uncomfortable.  Walsh had no intention of pursuing her feeling but Bloom convinced her to call the Fox “Hot Line”, and file a complaint. Bloom had the call video taped for the record. Now there was a complaint on the record in the Human Resource Dept. in the form O’Reilly had deemed legitimate. Next Bloom flew to Burgess’ home and convinced her to report the alleged coarse  comments she had relieved back in 2008.

The enemy has their shoves out and are digging deep for any mud to sling at O’Reilly.  On one occasion Bill had Margaret Hoover and Kirsten Powers on his show.  He got Margaret’s name wrong. She corrected him.  He said “Oh, I’m sorry.  There are a lot of blondes in this operation.  I can’t keep them all straight.”  Then he said “Thank you for your blondness”, to both.  Powers has now brought that up.

Many groups are out to nail people like O’Reilly and the conservative message.  Media Matters, founded by David Brock in 2004 is one.  He is a Hillary shill and out to smash anyone who disagrees with his groups point of view. He is out for revenge for Hillary’s loss. An email has surfaced stating that O’Reilly was a target of theirs to take down. Allegedly this organization has reached out to advertisers to get them to boycott Fox and not to return for fear of bad publicity.   I am even wondering if Media Matters or some such group had any part of connecting Burgess with Bloom. They are clearly beating the bushes to squash Bill and maybe even Fox as a whole.

O’Reilly and Fox have settled conflicts over the years for a reported thirteen million dollars since 2004.  According to legal experts, companies occasionally settle disputes that they believe have little merit because it is less risky than taking the matters to trial, which can be costly and create a string of embarrassing headlines. To date O’Reilly has not been found guilty of any wrong doing, EVER.

This is what a friend had to say on the above subject. “I think sexual harassment was an excuse to get rid of O’Reilly.  Fox is moving to the left and he was not politically correct.  The feminist movement holds lots of sway with the media and the Democratic Party. Sexual harassment is a tool to do away with those who are not politically correct”.

In conclusion I think this whole event was an orchestrated campaign to destroy O’Reilly, He was the goose who was laying the Golden Eggs and brought in lots of revenue. If the king pin could be brought down then maybe the rest of the conservatives there at Fox would go down as well.  Free speech was also the target.  The Murdoch brothers and their wives want Fox to become CNN 2. Obama once said that if he watched Fox he wouldn’t vote for him (Obama) either.  What a telling statement. Harassment charges are hard to prove. Often they are more about perception rather than truth. Attorneys gobble these kinds of cases up.  They see dollar signs and fame. Much of the complaints are he said, she said, without much proof. Words are powerful, even lies.   Truth is hard to dispute, so the only way to fight it is to not tell the truth, to cover it up, or distort.